Have you ever met a hair-covering Buddhist? We’re always amazed at the sheer number and diversity of spiritual backgrounds that inspire women to cover their hair. Check out Victoria’s beautiful and personal story below – and don’t miss her stunningly elegant wrapping style! 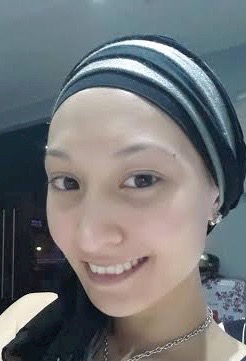 My name is Victoria Hogan. I’m a soap maker, business owner, homesteader, and blogger on hippiestink.com. I began wrapping part-time about five years ago, after much debate and thought. My mother is Vietnamese and a Dharma Buddhist, while my father is Irish-Romanian and Cherokee and a practicing Wiccan. I felt more connected to Buddhism, and it’s actually the main reason I wrap my hair.

My hair has always been the subject of envy from my friends. I have fine but dense hair, and in a very dark brown that is almost black. “Asian hair”, my friends would call it. People would always ask me “can I touch your hair!” Some people wouldn’t even ask and would just come up and grab it. I also would fuss over my hair, spending lots of money on conditioners and masks and product to make it look the way I wanted it. I would bother my mother to spend hours on styling it, and would spend a lot of money getting it cut the way I liked it. It became a nuisance and a distraction.

When I began practicing Buddhism in earnest, attending temple and such, I noticed the nuns all had their heads shaved bald just as the monks did. Some wore little sock caps and such, but they were completely bald. They do this to show humility, that they care not for things of this world, and that they are beyond the vanity of their hair. I did more research on the matter and learned that there are some nuns who wear coverings over their head, and that it’s common for nuns to shave bald or cover their hair. After thinking it over, noticing how vainly I viewed my hair, and debating with myself I came to the decision that as a layperson in the Buddhist faith I would cover my hair.

To me hair is a woman’s glory, her pride and joy. It’s considered a status symbol to have glorious, beautifully kept, healthy hair. I used to be so preoccupied with my hair, that it became the thing that I let define myself. I began covering my hair because I wanted to remind myself that I am more than my hair, that my vanity is less important than reaching Enlightenment and Nirvana. I began wrapping and wearing hats and snoods over my hair so I could stop focusing on how my hair looked and remember the important things: family and faith.

I cover for my faith, and I don’t let fear of what others may say and do stop me. We go often to Antwerp, where I can safely wrap because of the large Jewish population. When I’m not safe at home or among others who would not mind, I don’t wrap but wear a snood or hat. I’m glad to share my story with such amazing, beautiful women and I hope you find my story enjoyable!