It is my absolute pleasure and honor to introduce you to Jen.  Jen’s story is a personal and deep one, and I am so honored to have been a witness to her incredible journey (and I know that journey is just beginning!)  She has put so much effort and love into covering her hair, and has been wonderfully open about her struggles and successes.  She truly has come into her own in developing the perfect tichel style for her unique personality – it’s so inspiring!  Even though we’ve never met in person, I feel so connected to her, and can’t wait to the one day that we can meet!  Here she is!

Many people have asked  how I came to start covering my hair …..

I first felt the desire to cover in around 2009.  At the same time we were coming out of the church and moving through the “Hebrew Roots Movement” – which turned to to be a very brief period, as intensive study led us both, separately, by the beginning of 2010, to prepare for conversion to Judaism.  That, of course, is another story!

I started covering very occasionally between 2009 and 2010 – mainly for Shabbat meals, but when we were coming up against more than the 3 traditional “obstacles” in our quest to pursue conversion (another story!), I stopped covering.  But there must still have been some underlying or subconscious desire deep within me, because I kept purchasing scarves!

About 18 months ago, I started covering at home to read the parashah on Shabbat, and on sundays for shopping.   Shortly thereafter, we started attending synagogue in preparation for conversion and I asked someone in a leadership position if I would be able to cover.  I was told it was “not done” and I could wear a kippah if I liked.   Wearing a kippah was, for me personally, absolutely out of the question.  Only the Rabbi’s wife wears a kippah when she occasionally attends services.  Hubby and I both understood the “not done” to mean “may not be done” so I continued to cover my hair on Shabbat mornings to read the parashah and then remove it to go to services.   After a few months we thought to ourselves “this is ridiculous!” so in May we approached our Rabbi and asked his permission to cover.   He readily agreed, he was almost surprised we had asked his permission and even more perplexed that we had both felt dissuaded by this other person.   I still remember the first time I covered for a service.  I was so self-concious and I know that people were looking at me.  But I survived, and each week, for both the Kabbalat Shabbat and Shacharit Services, I attended, wrapped.  At this point I was showing my fringe and doing very simple wraps.

Around February/March I had come into contact with “Wrapunzel” on Facebook.  Two amazing Jewish ladies, passionate about the mitzvah of headcovering, who first created a blog with tutorials and then opened an online scarf and accessory “paradise”.  They, together with the Wrapunzel Fan Group on Facebook, gave me so much encouragement, support and teaching.

Covering is something that is unusual in our city, even with a predominantly orthodox community, and it was extremely difficult for me to go to service after service, knowing that I was “sticking out like a sore thumb” and knowing that people were talking.  Some people asked me about it directly and I appreciated the opportunity to try to put into words why I chose to cover.  I continued to cover just for services and on sundays.   I was too nervous about the reaction if I extended my wrapping to community events or for work.

I decided to cover for work for Tisha B’Av and was met with quite a positive reaction.  The timing probably wasn’t the best because I felt quite bad getting so many compliments on what was the saddest day in the Jewish calendar!  I explained to my boss afterwards why I had covered and said I would like to do it more regularly.  He told me that he didn’t care what I wore on my head!!  I then covered for a two day Jewish conference in August, which was attended by about 150 Jews, mainly orthodox, and I received quite a few negataive comments and stares.  I still held my head up high, though, even though on the inside I was a wreck!   One of the overseas presenters wore a headcovering (the only other person present), and although I didn’t get the chance to speak to her, there was a “smile of sisterhood” between us.

On 1 September 2014, I decided to “take the plunge” and cover full time for work and public, still showing my fringe because I’d had one since I was 13 (nearly 36 years!) and I thought I looked too wierd with it tucked in.  My boss was a little “bemused” because I don’t think he realised that “more regularly” was going to turn into “all the time”.    In late October, I made the decision that if I believed strongly in head covering, then I should cover ALL of it.  And since then, I have not left the house uncovered, even to the extent of keeping a cap at hand should anyone knock on the door or for running down to the communal washlines.  During this time I have acquired more confidence and maybe a little bit more skill!

I still cannot express eloquently WHY I choose to cover.  I just know that I HAVE to.  There is a burning desire within me to do it, to honour my Creator, and to honour my husband.  I choose to cover in a way that is both modest but fairly attractive at the same time.  I don’t believe in looking ugly.  But I’ve never felt ugly in even the most simple Israeli tichel.   I feel set apart, beautiful, feminine.  Whilst there may not be a specific instruction in Torah “thou shalt cover” there is enough “evidence” to convince me that it was a tradition even in those days.  Rivka covering herself before meeting Yitzchak, and the story of the “Sotah” in Numbers are two examples.

I still meet with criticism and occasionally it has been cruel and uncalled for.  I have brushed it off in public and cried in private.  I have sometimes said “I can’t do this anymore”.  But when it comes down to it, I could not even conceive the idea of leaving my home without a covering.  I have regular “tichel tantrums” when my scarves won’t sit properly (“tichel” is the yiddish word for scarf) and because of my problem wrist, sometimes battle with a simple knot.  I am so grateful for a husband who supports, encourages, and even helps wrap my scarves when I can’t do it myself.   I am also so grateful to the communities on Facebook who are there with advice, encouragement, support, love, friendship …. and yes, even loving honesty when I ask for opinions & advice.

I do not regret my choice to cover, even though it is a “lonely” choice.  I believe it is a beautiful mitzvah.  And it’s a mitzvah I’d encourage all ladies to try!  You might just feel as special as I do. 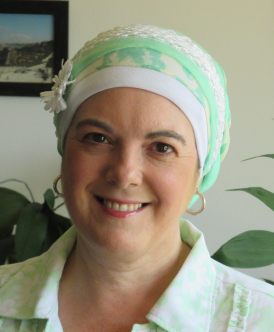 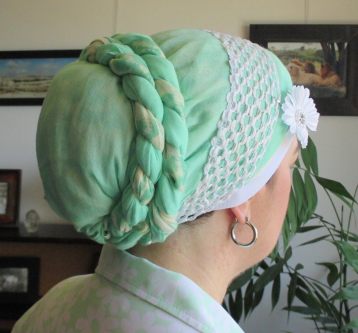